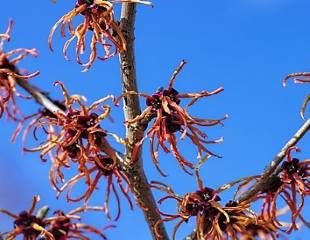 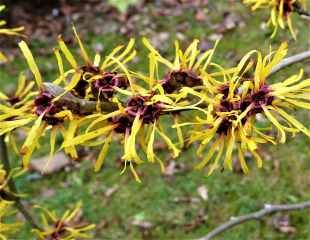 Hamamelis is a winter flowering large shrub or small tree which also provides strong autumn leaf colour. Images right and left shows details of the flowers of Hamamelis, both red and yellow varieties. The centre image is shows the general shape and appearance of a Witch Hazel in flower, in a woodland setting, under planted with snowdrops.

Most Hamamelis flower in winter and do so on bare branches, the flowers appearing before the shrub comes into leaf, similar to Forsythia. Hamamelis x intermedia and Japonica bear flowers in the winter and have lovely autumn colour. A bonus is that some varieties have scented flowers, such as 'Vesna' (RHS Merit) a sweet honey scent, 'Barmstedt Gold' (RHS merit) scent described as similar to bergamot, H Mollis 'Wisley Supreme'. Most grow up to around 4metres although there are some smaller varieties.

Flowers are predominantly yellow, but some varieties have red and orange tinges. The Images show that the flowers are spidery and unusual; the scented varieties are good to cut and bring indoors for colour and scent.  Hamamelis are slow to get going and can take a couple of years to get established and flower well.  Witch Hazel is slow growing about 3-4m in a a 10 year period,  which makes it suitable for a smaller garden. Witch Hazel is hardy to H5 which is between -10-15C.

Given that Hamamelis are winter flowering they look good under planted with Helleborus, snowdrops as in the image, and with spring bulbs to make spring woodland garden.

Hamamelis will tolerate partial shade, although they may bloom better in a sunny position which is their preferred growing conditions. To establish Hamamelis in an area of partial shade the other growing conditions need to be suitable. This means fertile, well-drained soil which is neutral to acid ideally a pH range of 4.5 -6.5. Witch Hazel are a long-lived and hardy but dislike to be in a frost pocket or an exposed area. Hamamelis planted in frost prone area  will need protection from frost for the first year or so until established. In addition, until established, Hamamelis Witch Hazel may need watering during dry periods.  Once established, trouble-free.

In a sunny area Hamamelis will be more tolerant of other soil conditions but still will not thrive in an exposed area, even though they are described as fully hardy. The flowers on Hamamelis bloom on last year's wood, which means that Hamamelis should be pruned immediately flowering. Witch Hazel does not require pruning, but it can be pruned to restrict it's size or remove dead wood. It should be pruned in early Spring after flowering, to reduce size take out 2 or 3 longer branches to a side branch to keep a good shape.

Hamamelis are not the easiest of shrubs to get established, and if you feel your garden conditions are not ideal, but are looking for an early flowering yellow garden shrub, Forsythia is a less adventurous  but an easier alternative. 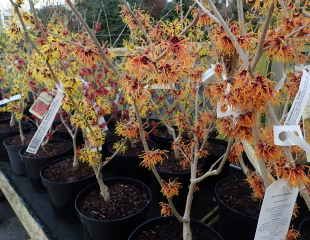 If you are planting Witch Hazel for winter scent, I recommend that you buy a plant in January when it is in flower. In the line of Witch Hazel on the left, offered for sale at a garden center, many were described as "scented" and " highly scented" and having walked done the line with my nose in the flowers, only one struck me as strongly scented. For this reason, if scent is important, I would not go by the description, but purchase the shrub during its flowering period so you can assess for yourself its scent. (see below H. Pallida did stand out.)

A good guide on which varieties to grow is by reference to the RHS and between 2014-2016 the RHS conduced trials on Hamamelis at the Witch Hazel Nursery in Kent. 138 cultivars were assessed over 3 years and 17  were granted the RHS award of garden merit. The plants assessed were all mature between 10-20 years old and factors the judges considered were: flower quality which based on colour, size and shape, together with the amount of flowers and length of flowering time. The  full list is on the RHS website. Listed below are varieties which did well in the trial and are readily available.

Witch Hazel flower yellow, red and orange and here are one of each colour awarded the RHS Award of Garden Merit.

H. x intermedia 'Diane' a red variety, faintly scented and it forms a bushy shrub of around 2.5m tall and 3m wide. The recommendation is to plant it where the winter sun suns through to back light and illuminate the flowers.

Also recommended is H. x intermedia 'Pallida' early to mid-season flowering, strong yellow flowers with citrus scent very popular and reliable, with good autumn colour. In the line up above, this is one variety whose scent did stand out.

Hamamelis, Witch Hazel, is tagged Amber Wheelbarrow because it can be slow to get established, requires precise conditions and not too keen on cold exposed condition.