What is the Chelsea Chop

May is the traditional time to undertake the Chelsea Chop, so called because it's often done around the time of the Chelsea flower show. The Chelsea Chop has several functions; it makes the plant more compact, and it also delays flowering.  It is useful to use on plants sprawling in habit, such as Nepeta illustrated below.  Cutting the plant back delays flowering because the plant needs to grow on more before it can flower.  This means you can have some plants, of the same type, flowering later to stagger the flowering period.

Using the Chelsea Chop will make the plant to bush more which means it is ideal for plants which have a tendency to become leggy later in the summer, such as Nepeta common name Cat Mint illustrated. 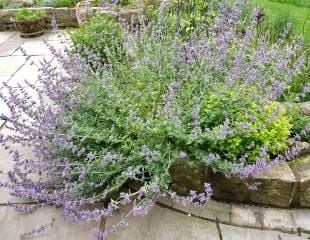 Nepeta is notorious for sprawling, especially as the summer goes on it can almost develop a bald spot in the middle.  This Nepeta has been left unchopped and is quite large and becoming a little bare in the centre. 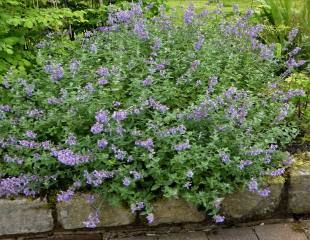 This Nepeta was subjected to the Chelsea Chop and was cut back overall by around anything from 10-20 cm. The timing for Chelsea chop varies on the sort of spring and summer as the more advanced the plant is, the earlier to chop it.

How to do the Chelsea Chop

Chelsea chop can be done in a number of ways, and in fact, not just in May depending on the plant, see below.

One method of doing the Chelsea chop is to cut the whole plant down by about 1/3 and this delays the flowering all over the plant and makes the plant more bushy, (you are in effect pruning it during it's growing season.)

Alternatively, you can chop some plant's stems by a third, but don't chop other stems on the same plant, which will stagger flowering. The unchopped part will flower first and later the Chelsea chopped part.

Another way to do the Chelsea Chop if you have two or more plants of the same variety, chop one but not the other, the options are varied.

Is it worth doing the Chelsea Chop? I think so, it really comes in handy to make plants bushier with more flowers and, especially towards the end of the season, when some plants, left unchecked get leggy, it can be used to good effect.

Note also that the Chelsea chop may result in smaller flowers, as illustrated above.

Also, sometimes as a border plant get more established and matures, it becomes a bit large for its allotted space overshadowing neighbouring plants, which may not be ideal. The Chelsea Chop is one way to stop the plant overshadowing its neighbours; chop it in May or June and it will flower on shorter, bushier stems.

Later flowering perennials can be cut back in July, and for early flowering plants use the Chelsea Chop in May or June. Some plants will benefit from being cut back hard to encourage fresh new growth or a second flush see list below.

Short video explaining how to do the Chelsea Chop

Which plants are suitable for the Chelsea Chop

There are many plants suitable for the Chelsea Chop or for cutting down/pruning during the growing season.

Plants suitable to cut back to get a second flush of flowers: There are several Perennials plants suitable for chopping in July to encourage a second flush of flowers. In these cases cut after flowering, and feed. A second flush is not always successful, and the flowering will not be as strong. In each case just cut off the flower head stalk which have flowered to encourage side shoots. This is suitable for Hollyhock,  Astrantia, Delphinium, Digitalis, Campanula, and Penstemon.

Plants suitable to cut back because of poor foliage later in the season: There are some plants where it is a good idea to cut back to get new foliage and these plants can be cut back almost to the ground, again after flowering in July. This is good where the foliage looks tatty and within 14-21 days new fresh foliage will shoot up which will look more attractive for the rest of the summer. This is suitable for Alchemilla mollis, Hardy Geranium (Cranesbill)  and Salvia.

If it is a Sedum it is just so easy; push the tip which has been cut off into the ground, and if kept moist it will root where it is, with no more effort than making a hole with a dibber. The other plants which have been Chelsea Chopped are also quite easy to root and are best placed in a small pot with a poly bag over to retain moisture, or in propagator away from sunlight.

It is good fun and worth experimenting with the Chelsea chop and cutting back some plants by a third, others just some individual stems by a third, or on the same plant cut some stems and not others.

Chelsea Chop is not suitable for flowers which flower only once such as Peonies, Irises and Aquilegia.