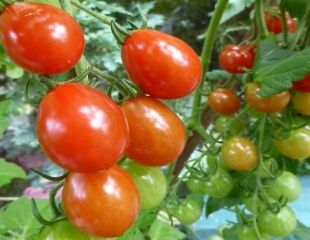 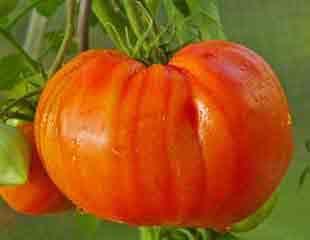 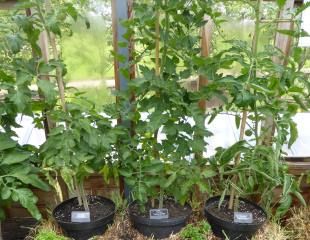 Upright tomatoes are also known as Cordon or Indeterminate Tomatoes. As the name suggests they grow upright with a single stem and do not bush. Upright tomatoes have additional growing requirements which include stopping off the growth, pinching out the side shoots, and thinning the foliage- detailed below.

Some types of tomato are found only as either upright or bush, for example, the larger tomatoes, especially beefsteak are upright. If you want to grow different types of tomatoes you will need to grow both bush and upright

The 2 main types of tomato plants, Upright also know as Cordon is shown in the centre image above, and Bush tomatoes shown growing in the hanging basket.

Bush tomato are shrub like in growth and need some support, a light cane will do. Overall, they are easier to grow then Cordon Tomatoes which grow up to 2m and more.

Which variety to choose is a question of personal taste but remember the large, Beefsteak type, because the fruits are so large take longer to ripen. This means if your veg plot, or greenhouse is in an exposed area, or further north they may not ripen until late in the season.  For many gardeners the easiest tomatoes to grow to ensure plenty of fruit and not too much trouble are the cherry types and there are good bush cherry tomatoes which are easy to grow.

Pinch out side shoots 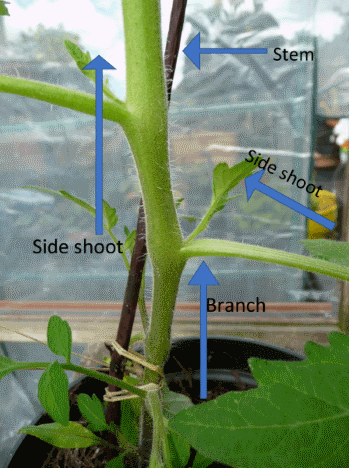 By doing this you are containing the plant's growth, you do not want a lot of extra branches growing out sideways. Unless these shoots are removed the plant, which is very vigorous, will produce a mass of leaves and shoots. By restricting growth it will produce more fruits.

Later in the season, if you have time, it is a good idea to thin out the tomato foliage which diverts the plant's energy into making fruits and not more and more leaves.  Thin out foliage as soon as the flowers appear and carry on as the plant fruits. Towards the end of the season the plant shouldn't have masses of leaves on it. Be bold, cut them off. In the peak of the growing season I remove lots of leaves each week when checking the tomatoes. This also aids ventilation, which helps to reduce the risk of diseases. By the time there are several trusses of fruit, the leaves should be well thinned out. 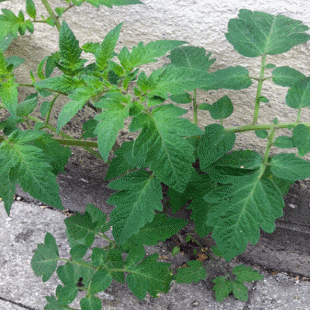 One of the reasons upright tomatoes need more attention is because they are very vigorous and grow tall. Later in the season, around September it is necessary to "stop off" the tomato plants.  This image left was a self seeded tomato into a city pavement, tomatoes are vigorous.

Upright tomato plants, left to their own devises will produce masses of growth and leaf at the expense of the flowers and fruit so to get a good crop, it is necessary to constrain the plant.

Stop off at the growth tips when the plant has 3-4 (outside grown) and 4-5 (greenhouse grown) trusses which are layers of flowers. Tomato plants are vigorous and produce a lot of growth and leaf in full season. It is time-consuming but essential to take off some leaves and thin growth regularly. Continue taking out the growing points as the plant will strive to keep growing. This means once you have cut off the top of the plant to stop it growing you will need to do this again, and again, as it will keep trying to grow through the greenhouse ceiling.

Because Cordon tomatoes grow so tall, they need support. There are commercial metal supports as show above the grow bags. However simple bamboo canes and wooden stakes are just as good. If the fruit is heavy or large you may need to support it with extra ties, and again raffia is very good for this.

Looking at the images on the right the cordon tomato is tall and thin. The Bush tomato in the hanging basket is like a small shrub.

The Bush variety of tomato, of which there are many types, are easier to grow because they do not need pinching out, less potting on and it is unnecessary to take off side shoots.

Bush tomatoes can be left to get on with the growing. Those sold as suitable for hanging baskets are often the small fruit varieties and they can do very well in hanging baskets with dozen and dozens of tumbling fruit.

Cordon Tomatoes growing in a greenhouse

This shows Cordon Tomatoes which are still relatively small growing in a Greenhouse. They will need to be potted on into large containers and supports by way of canes and ties added. 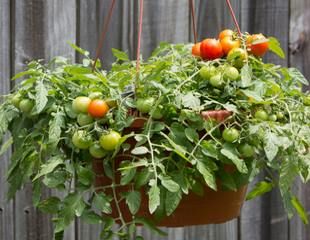 This is a bush tomato plant and the shape is quite different. It is ideal for hanging baskets and often supports the cherry type of tomato. It is easier to grow, and requires less attention.