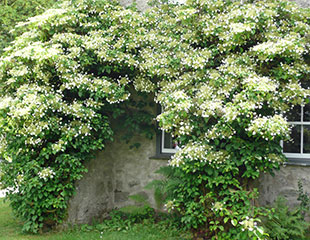 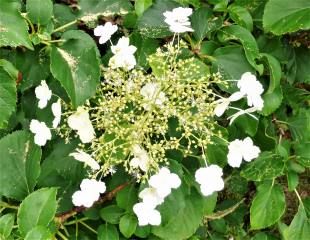 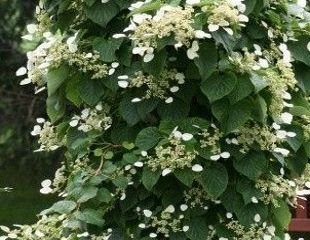 Commonly known as the Climbing Hydrangea, its botanical name is Hydrangea Petiolaris and it's a fabulous showy, late spring  to early summer flowering climber.

The images do not do it justice.

Climbing Hydrangea is easy to grow, too easy, a touch vigorous but not seriously so. It can be slow to get going,  but once established it is fairly fast growing.  It is important when first planted and establishing the shrub not to let it dry out.

A great advantage when growing Climbing Hydrangea is that it needs little or no attention. It is self clinging with aerial roots, the flowers are a creamy white and it is deciduous.

It will tolerate semi shade which makes it ideal for a north-facing wall,  and a useful climbing plant for shadier areas. Although the climbing Hydrangea is most suited to growing on moist soil, it is very tough and will grow more or less anywhere.

A climbing Hydrangea can become quite large over time growing up to 25m (80ft) which means it will cover a big area, the whole of a fascia of a house in about 10-15 years if grown in ideal conditions.  It does not require pruning, but if it outgrows it's allotted space,  it can be checked by pruning. The best time to prune climbing Hydrangea is after flowering in late summer,  when it can be trimmed to fit the space. The flowers are produced on last year's wood, which means if it is pruned earlier in the year before flowering, the flowers for that year will be sacrificed.

An additional bonus is that the Climbing Hydrangea is completely hardy,   -15 to -10 cold winter Hardy in most places throughout the UK even in severe winters.

Climbing Hydrangea is a reliable climbing plant flowering every year with lovely, frothy, creamy white  flowers and bright, almost lime, green foliage. The climbing hydrangea is suitable for growing anywhere in the UK.

The Sunday Gardener classifies the climbing Hydrangea as a "green wheel barrow" which means it is easy to grow and low maintenance.


© 2012-2022 Carol Jackson - The Sunday Gardener is a registered trademark.  All rights reserved.