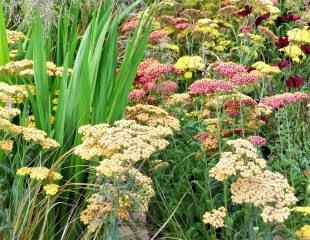 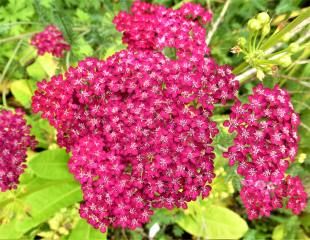 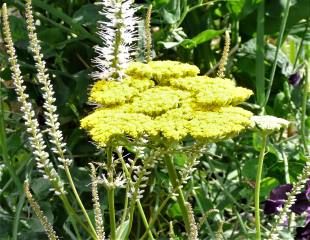 How to Grow Achillea

Achillea is a summer flowering herbaceous perennial which flowers from June to September. Each flower head is comprised of hundreds of tiny flowers which are long lasting. Although often referred to by its common name Yarrow, this really refers to Achillea millefolium which is a white variety seen growing wild and illustrated below.   The foliage is attractive,  light, feathered and a little like dill foliage in its appearance.  The foliage varies in colour from green to grey green, depending on the variety.

Achillea are herbaceous dying back over the winter. Achillea looks good in a mixed border with the added bonus of being easy to grow.  Achillea has wide range of flower colours from the subtle shades in the image top left and there are also bold coloured Achillea  such as A. 'Golden plate' which is a strong bright yellow, image far right and A. 'Cerise Queen' center image.

All Achilleas are easy to grow requiring no special attention except planting in the right place and sometimes staking, particularly the taller varieties. Achillea grow best in sun, the more sun the happier the plant, and those with the grey foliage tend to prefer the most sun. Most Achillea prefer conditions to be on the dry side with a good amount of sun. If the soil is heavy clay/on the wet side it will help to introduce some grit to improve drainage. Achillea are a short-lived perennial which will need replacement. Despite their lack of longevity, Achillea mix so well with many other great garden plants they are well worth growing.

Achillea require no pruning or attention and are generally pest free. In the long term Achillea often run out of steam after about three to five years, especially on heavier soils.  Stocks can be replenished by taking cuttings, pot and grow on in gritty compost until large enough to plant out in the borders. Achillea are not keen on heavy wet soils and it is best to defer planting out any small plants until the spring to avoid the winter wet. You can also divide to extend the life of the plant. Achillea are fully frost hardy all over the UK. 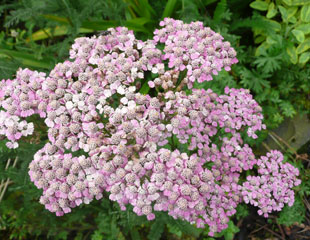 Achillea belong to a very useful group of plants whose flowers look good as they fade. This Achillea started blooming quite a strong pink (center image above,) and fades to a delicate shade. This means that Achillea flowers continue to look good in the border for many weeks and blend well with grasses and late blooming summer flowers.

Ideally to prolong flowering Achillea should be dead  headed, but it is tempting to leave the flowers on the plant,  because they look so good as they fade.

In the same group are Hydrangea which flowers also look very stylish as they fade.

Ideas for other summer flowering plants

Achillea are easy to grow and maintenance free. They will return and flower well each year although a shorter lived perennial. 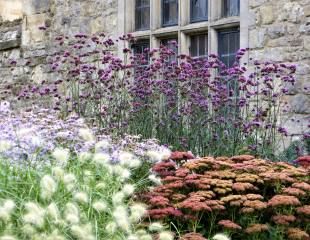 Achillea  'Walter Funke' mixed with tall purple of verbena bonariensis and fluffy grasses, likely to be a  Pennisetum. This combination was growing in and Oxford college garden, and looking good in late summer. 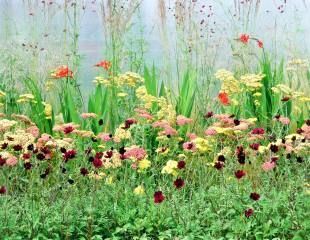 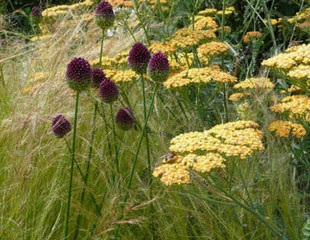 This is a lovely summer combination. Achillea  'Terracotta',and the grass Stipa tenuissima. This is teamed up with the late summer flowering Allium sphaerocephalon (distinguished from the spring flowering Alliums).

Images of different types of Achillea